The World with Higher Interest Rates

The World with Higher Interest Rates

Our outlook for the markets heading into 2023

The most aggressive monetary tightening cycle in decades has shaken global markets this year on concerns that central bank efforts to rein in inflation will end in a recession. Investors have cause to worry: historical evidence shows how tightening cycles have often ended in economic downturns when inflation needs squeezing out of the economic system. This time will be no different.

In Canada, the larger-than-expected fall in headline and core inflation in August suggests that the Bank of Canada will enact a smaller interest rate hike in October, particularly with the labour market now weakening. We think this September’s disappointing CPI report in the U.S. is just a bump on the road towards much lower inflation, and disappointing news on retail sales and industrial production remains consistent with the economy bending rather than breaking. We don’t expect the stock market to do an awful lot better while the U.S. Federal Reserve (“Fed”) is still tightening. The Fed stuck to the script in delivering a 75-basis point rate hike at its September meeting, but in our view, still managed to deliver a hawkish message with the accompanying projections, which imply another 75-basis point hike in November and a 50-basis point move in December, with more tightening to come in 2023.

The S&P 500 has fallen quite a long way since it was reported that CPI inflation was a higher-than-expected 8.3% in August. While we’ve enjoyed a couple of brief rallies, those have been offset by sharp sell-offs. One lingering question is whether we’ve reached a bottom because markets have tended to do so in the past after inflation has topped out.

What History Tells Us After Inflation Peaks

The reality is quite nuanced. Admittedly, the average real return from equities was significantly positive in the 12 months after inflation peaked at a high level in four prior episodes since 1960. But the average real return was far less impressive in the next 12 months after that. And, there was a lot of variation across those episodes, with the fate of the stock market depending on a combination of central bank response, its effect on the economy, and the initial valuation of stocks. 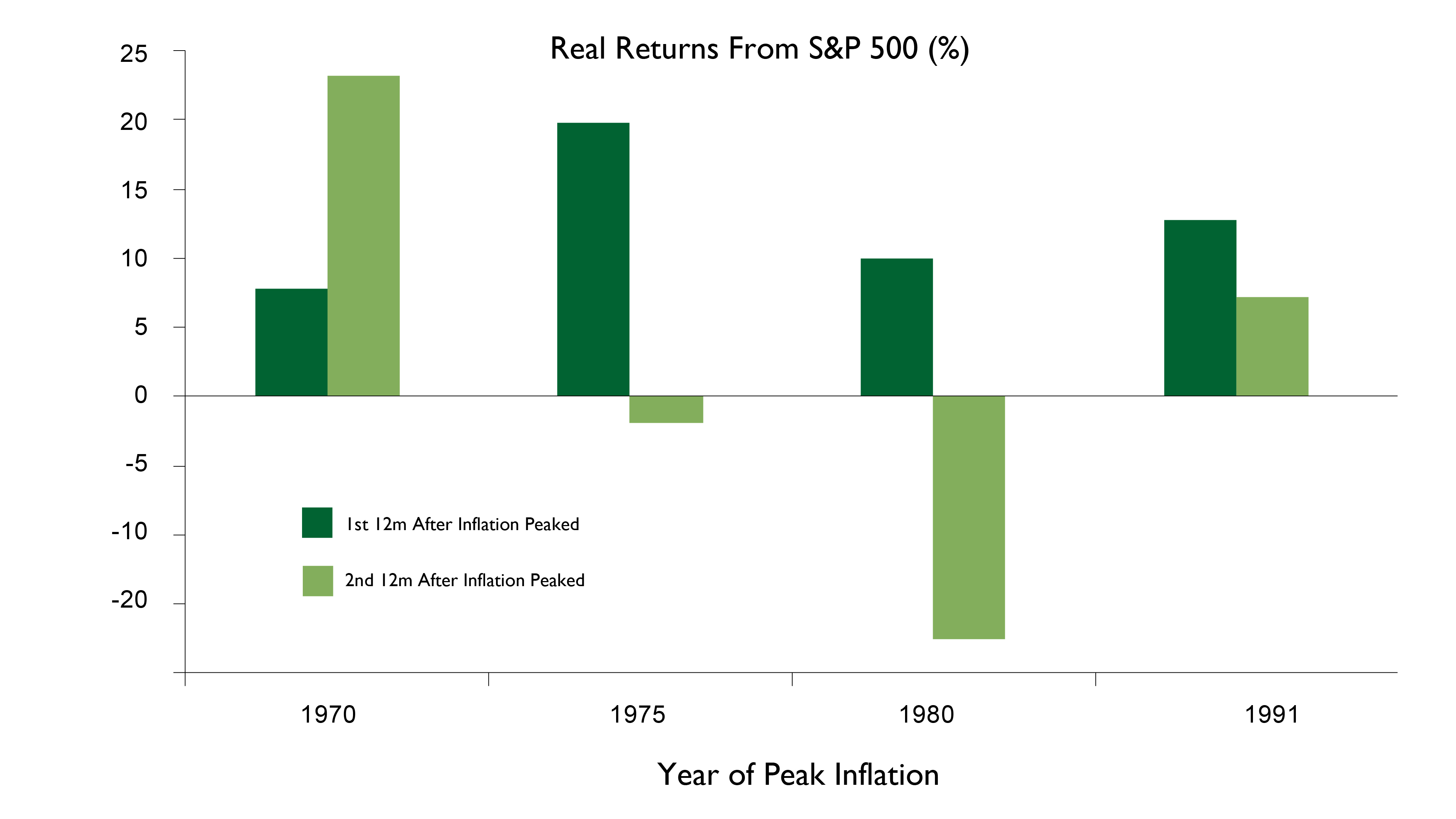 Bearing all that in mind, we can think of three reasons why, even if inflation starts to fall back significantly, that equity markets are unlikely to head to the moon again in the coming months.

First, if we focus on the U.S. Federal Reserve as a proxy for developed market central banks, we suspect it will be about a year or so from now before the Fed changes direction, limiting any near-term fall in interest rates. Amid growing scepticism about their credibility and great uncertainty over how inflation will persist, we believe that central banks will err on the side of caution by overtightening. Hence the current market expectations of a “central bank pivot” – lowering of interest rates in the near term – is overly optimistic.

Second, even if the global economy avoids a recession in the face of further monetary tightening, it will probably remain weak.

And third, the relative valuation of the S&P 500 remains high by the standards of the past. For example, Shiller’s excess CAPE yield, a measure that looks at equity market valuations in the context of current interest rates – the gap between the inverse of this CAPE ratio for the index and the ex-post real yield of 10-year Treasuries – is only around 2.5%, compared to 10.8% in August 1982, the end of the 1981-82 U.S. recession. Applying a similar view around the world reveals significantly better valuations outside of the U.S., but as we have expressed before, valuations matter over the longer term, but in the short term they are poor timing indicators. 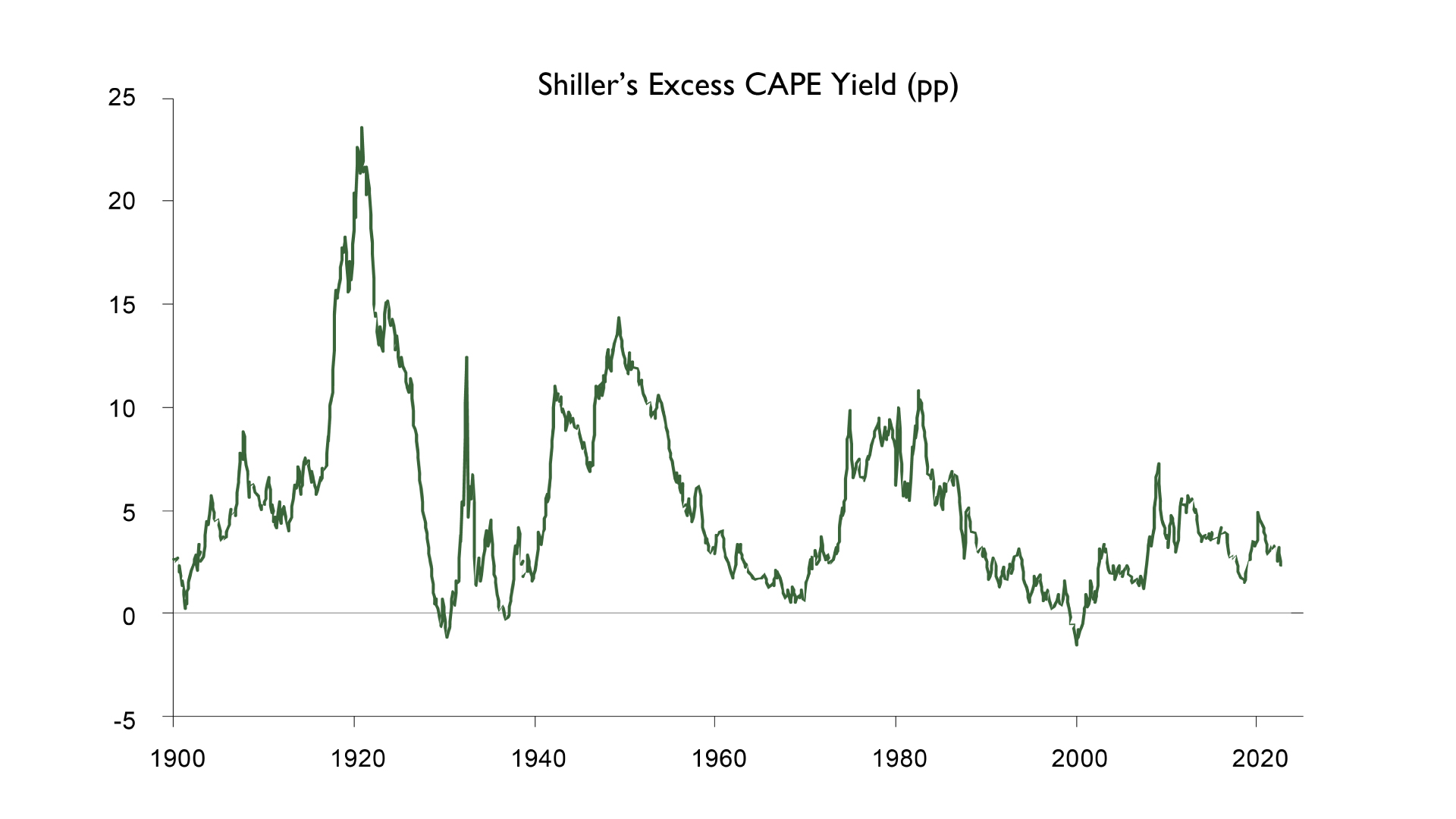 With that said, we continue to look for catalysts that will drive assets to these regions of higher expected returns, but in the short term, continued global tightening will put ongoing pressure on equities in three ways:

First, raising the required return from equities. Since the end of the global financial crisis to most recently, investors had to choose between earning zero (and in many cases a negative return) on their fixed-income portfolios or taking on more risk by invest in equities and lower quality bonds. They chose to take on more risk and plowed into equities, high yield bonds and other risky assets. That tidal wave of money led to high equity returns and high valuations. Today, the return from safe fixed-income investments is significantly higher and I suspect that many investors will choose differently going forward, reducing the support for equities until the next time that interest rates are lowered to below the nominal GDP growth rate -- which will then cause the cycle of misallocation of capital and valuations to rise above historical averages to begin all over again.

Second, rising interest rates reduce economic activity (i.e.: demand destruction) since the hurdle rate for any business opportunity is now much higher since the price of money is no longer zero.

Despite the market reactions in these first few days of October, we think a sustained recovery in global equities is more likely to begin at some point in 2023 than before this year is over.

Not All Bad News

Despite our gloomy near-term outlook for the global economy and equity markets, we don’t think its all bad news out there. For starters, we don’t think the expected rate increases will put much more pressure on equity markets, and we see things turning around in 2023. We don’t envisage a deep recession like the one in the early 1980s, which is why equity markets did so poorly for so long afterwards, even though the Fed had stopped raising rates in 1981. Lastly, the global economy is more likely to bend, not break, and therefore we don’t expect a surge in credit spreads, which would drive up firms’ borrowing costs regardless of prevailing interest rates. All in all, while a recovery isn’t in the forecast this year, we suspect one will occur at some point in 2023

Over the last year our expectations of headwinds to our portfolios, driven by high inflation, slower growth, and tighter monetary policy inflation were correct. Policymakers hiked interest rates aggressively as the path of least regret was to tackle inflation before it became entrenched within the economy. We believed then and continue to believe today that the global economy would cope with this policy tightening but expected some pockets of vulnerability and undoubtedly lots of volatility. Our expectations came true and in spades. I wish and hope that it wasn’t so and that investors didn’t have to endure this discomfort however, hope isn’t a strategy to which we subscribe. We positioned the portfolios earlier this year for this eventuality: reducing our risks in areas that we believed would suffer the greatest headwinds, diversifying our equity allocation into areas that are more resilient, and positioning our fixed income and equity allocations more conservatively. These changes benefited our investors, albeit it hasn’t shielded them entirely from the downturn, something that we don’t purport that we can do. We do not believe that the best course of action is to reduce risk dramatically.

Markets can surprise both on the upside and downside. Effective portfolio construction is ensuring that you are positioned accordingly so that you can continue to “fight another day.” We believe that we are positioned accordingly given today’s opportunities and uncertainties. We continue to monitor economic developments and market valuations looking for opportunities to move capital into areas with high prospective returns versus their risks. Uncertainty and volatility in financial markets, although unsettling, are great opportunities. I am excited about the prospect for our portfolios going forward.

Until next time, stay safe and be well.

In his Q3 update, Wayne Gillespie provides his perspectives on another tough quarter for investors as aggressive central bank interest rate policies continue to weigh on the financial markets. “Diversification should remain a key part of an investor’s...

In his Q3 update, Rana Chauhan, Counsel’s Chief Investment Strategist, discusses how inflationary pressures and the associated fallout continue to cast a long shadow over global financial markets. To help get inflation back under control, central banks...

Appointing an Executor: Who Will You Choose?

When appointing an executor for your estate, the person who first comes to mind won’t necessarily become your final choice.